The documentary, Kitchen sink revolution won “Einarinn” the public award at Skjaldborg Film festival 2015.
The film is a sequel to another film by Halla Kristin Einarsdottir, “Women wearing red socks”, which also was awarded the same price in 2009. Hrafnhildur Gunnarsdottir produced the film on behalf of Krumma Films.

The Kitchen sink revolution is about effect of the women’s party that ran for office in 1982 on women in politics in Iceland, after the colorful grassroots radicalism and awakening of the seventies the so-called New Women’s Movement (or Second Wave Feminism) took on different routes throughout the Nordic countries. 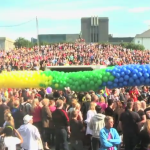